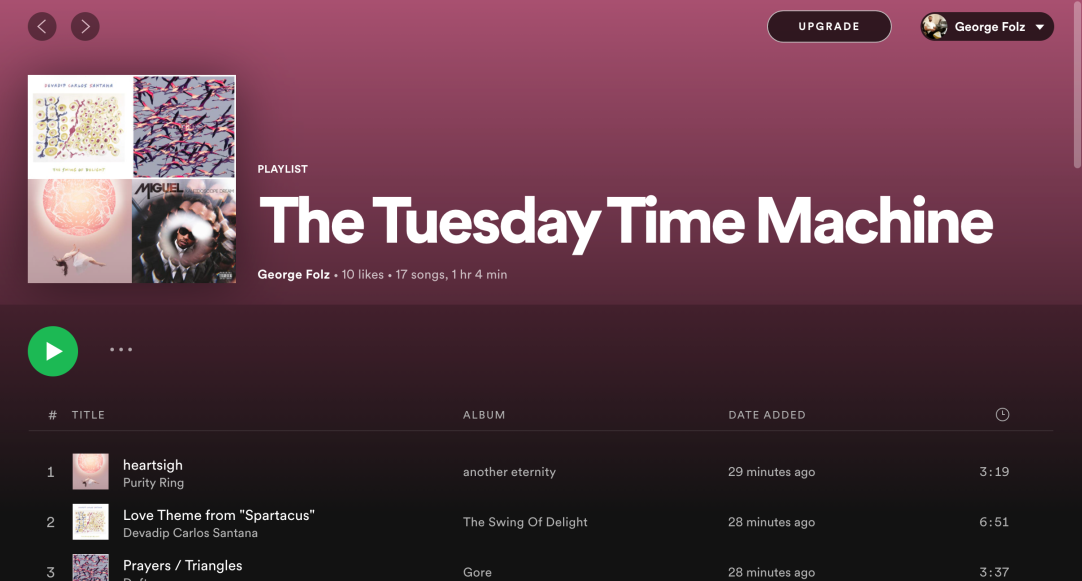 By Mr_Dodds in Everything, Reviews on February 16, 2021
No comments

For those reading my column for the first time, these monthly playlists which I’m re-visiting (and continuing to create) came about as a result of an idea I had back in January of 2010: an idea that would see me create one 80 minute playlist a month.

The reason for doing this was two-fold: I wanted to create and re-enforce very specific lived experiences and memories tied to music, and I wanted a rather consistent set of songs to propel me each month as I created my art.

In creating these playlists, I tried to make things flow— I wanted songs to segue very effortlessly (or abrasively) creating a sense of narrative.

Going forward, once a week, I’m going to update the Spotify playlist that you can find below.

I’d recommend not shuffling the songs, as they were sequenced the way that they were for a reason. To get the full experience, listen to them in the way in which I’ve arranged things.

Right, so I heard this while I was low-key, kinda drunk in a Fillipino restaurant with some old college friends.

It was a pretty great night

I think this was honestly, only the second Purity Ring song that I’d heard, but I was into it. It sounds like the most glorious blast of sunshine that you could ever hope to bathe in, and, at the beginning of a particularly brutal February in the midwest, that was a blessing.

I follow either Santana or Herbie Hancock on Facebook, and because of that, this came across my radar one morning.

While Santana’s contributions on here are just fine, this tune is almost more about who has he backing him up.

Why does Ron Carter get a Mr. in front of his name, and those two other gentleman do not?

Because Ron Carter is STRUTTING on this track.

Nobody has ever called into question his bass playing abilities, but when his bandmates were Tony Williams, Miles Davis, Wayne Shorter, and Herbie Hancock, there wasn’t necessarily a lot of room left for him to be flexing.

Here however, he’s making up for lost time, bringing both swagger and rhythmic excellence to the proceedings.

It’s some of my favorite bass playing I’ve ever heard, and they more than do justice to a song that fellow Miles alumnus Bill Evans turned into one of his calling cards, back in the day.

When this first made its way onto the internet, all we got was the music, and a large number of flamingos in flight (seen above).

Not the most metal thing in the world, right?

But somehow, it is…

The chorus here is a delightful ear-worm, and the guitar melodies found within the verse are just the best thing ever. Sergio Vega plays a baritone guitar on here too, I think, which gives things a bit of a different dimension.

Sing this for her, but ONLY IF SHE’S BABY GIRL.

Look folks, this is one of the best R&B songs of the last 30 years.

When Miguel’s vocals find shoot off into the stratosphere at the tail end of the song… I mean, I don’t know, the planets probably get knocked slightly out of alignment or something.

What I’m trying to say is, “THIS IS POWERFUL, BABY.”

Trying to get sad in the middle of winter?

Maybe Valentine’s Day didn’t quite shake out this year?

Look no further, folks— cuz it’ll never get better than this.

In all seriousness though, as good as this song is for getting into your feels, it’s ALSO one of the best R&B songs of the last 30 years.

This is for that 8PM sad session— when you’ve got two hours before bed-time, you’re not really happy with your drawing, and you gotta remind yourself, “idk, it’s just HARD out here.”

Note: I have a very old King Crimson box set from the mid-90s, and it looks like it’s not on either YouTube or Spotify.

How serene, beautiful, and lovely.

Seriously, just put this on, and let yourself soak in it.

It’s like a warm-bath right? You’re sipping on some rich shit, feeling like you’re on some big money shit?

That’s probably just for the libra ladies— cuz halfway through your bath, the credit card collectors call, and that reminds you that you have to change your phone number again.

I’ve recently been reminded of how much I love Zakk Wylde’s guitar playing.

And he can sing too— like a down south Ozzy, which makes sense, considering how many years he was the Ozz-man’s guitar slinger.

In any case, the chorus in this song is about as tough as the steam-roller that flattened out Judge Doom in, “Who Framed Roger Rabbit?”

It also features some dog-whistle pinch harmonics for the CONNOISSEURS, so you KNOW it needs some volume.

Sometimes, you just need an interlude.

I feel like interludes aren’t USUALLY this good either, so I had to give it some shine.

This doesn’t necessarily sound like a Baroness tune either, as it borders almost on funky in certain places.

Is there a better synthesizer movie theme?

This is just 80s gold, folks. A theme that’s short and sweet, that features everything I love about synthesizer music, this song has it all.

This is just pitch perfect, from both a production and vocal standpoint.

And don’t get me started on the bridge, or interlude, or whatever it is, when he starts singing about, “the birds up in the sky.”

We’re not WORTHY of something that good, and perhaps, my life would be better if I didn’t know that such a supremely perfect bit existed within a song.

It’s hard for me to talk about this song musically, because it’s so intrinsically tied to something else in my life.

Not worth really going into, but you know how sometimes, you’ll hear or see something that reminds you that something that ended up being not-so-great, started out really beautifully?

This is one of those things for me.

I’m thankful for that, I think. Because even when something goes bad, you can smile about part of it.

I’ve no idea if Lucinda Williams ever lived in Minneapolis, but I’d be hard-pressed to believe that she didn’t, considering the specifics of this song.

If you ever wanted to know how it feels to experience a sense of longing, when the outside temperatures are not your friend, and your heating situation is questionable, look no further.

13. Do What you Gotta Do- Nina Simone

If this doesn’t warm you up on a winter day, I don’t know what will.

I found this thanks to the Kanye song on Pablo, and it continues Ms. Simone’s win-streak in my book, as I’m pretty sure I’ve not heard a bad song from her.

Usually, I have a pretty strict rule of thumb, that I don’t repeat artists in these playlists.

HOWEVER, because this is BIIM AND Mariah Carey, I made an exception.

I don’t care what anyone says, this song is a HIT.

People can hate on Mariah, but you know what? They’re not hitting the notes that she is.

I’ll stand by this being great, any day of the week.

This song was a favorite amongst some of my students back when I was working for the organization, and…

Idk, I guess I have a soft spot for it.

Or maybe, just for that time?

Can we TURN BACK THE HANDS OF TIME?

On each of their albums, Polica has one kind of slowish, albeit gorgeous ballad, and on United Crushers, this was that.

Listening to this, I can’t help but remembering sitting at my drafting table, looking out the window at a very hostile winter landscape, as the sun tried to peak through the clouds.

I feel like the synthesizer that bubbles in the background is the aural equivalent of that earnest sun, trying to break through here, though it never manages to full do so.

And that’s okay, because even though this is a sadder piece of music, it’s still wonderful.

And here it is.

Holy shit, this is everything.

If you’ve ever spent a winter around these parts, you know this brings to life ALL of the Ice, and ALL of the snow, and EVERYTHING that comes with the bleak, and/or chillingly beautiful.

Just listen to it already. My words can’t do it justice.

We needed to close things out on a happy note, right?

I love this song, and I always will.

Probably, because it’s from my childhood, and Mission: Impossible was a big deal to young George, aged 8 (this plays in the background, for one of the final scenes). Even without the nostalgia though, this is a hard-hitting piece of pop perfection.

Karl, how did this not make your god-tier list, last year?

View all posts by Mr_Dodds