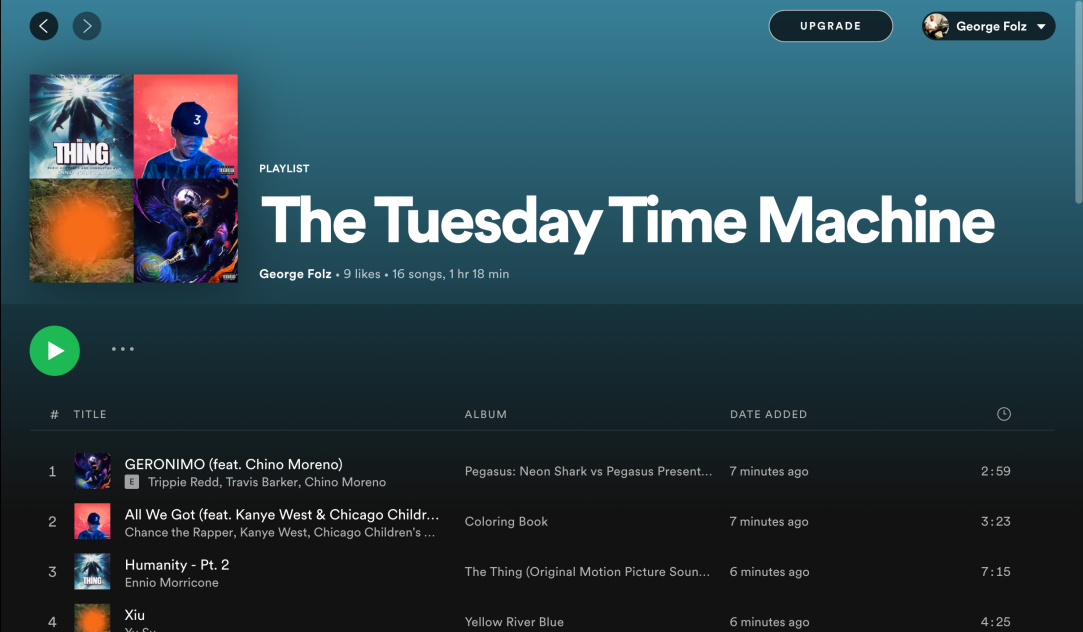 Off the bat, this month was a WILD one.

I had a really hard time putting this month’s playlist together because there was just SO MUCH good music released.

Seriously, there were like 5 or 6 songs that unfortunately, had to be dropped from the playlist, because it was bursting at the seams!

As you’ll find out later in the column, this was due mostly to Mates (dammit) who… yeah, he’s full-on killed it with the official Indie Pong playlist for the year, and I had to crib SEVERAL of his selections for the Time Machine.

In any case, things came together in the end, and this is certainly, one of my favorite February playlists.

For those reading my column for the first time, these monthly playlists which I’m re-visiting (and continuing to create) came about as a result of an idea I had back in January of 2010: an idea that would see me create one 80 minute playlist a month.

The reason for doing this was two-fold: I wanted to create and re-enforce very specific lived experiences and memories tied to music, and I wanted a rather consistent set of songs to propel me each month as I created my art.

In creating these playlists, I tried to make things flow— I wanted songs to segue very effortlessly (or abrasively) creating a sense of narrative.

Going forward, once a week, I’m going to update the Spotify playlist that you can find below.

I’d recommend not shuffling the songs, as they were sequenced the way that they were for a reason. To get the full experience, listen to them in the way in which I’ve arranged things.

For a few of the songs on this month’s playlist, I did extended write-ups, earlier in the month.

This was one of the them, and you can read the original article here.

2. All We Got- Chance the Rapper featuring Kanye West & Chicago Children’s Choir

I know that both Chance and Kanye have had some rather negative things in the mix these past few years, but their personal lives and business dealings notwithstanding, this is one hell of a tune.

The chorus is an astonishing, uplifting, and wonderful thing, that I fell in love with the first time I heard it.

The horn work here is of particular note too, alternately booming and beautiful throughout the song.

John Carpenter’s, “The Thing,” is my second favorite horror movie, and sits proudly within my top 5 for movies of every stripe as well.

Notable for it’s heartbeat-like synthesizer motif, it’s some of the scariest stuff ever recorded.

A far cry from his sprawling, lush work for Sergio Leone, the music heard here only explodes out of sheer terror and fear, much like the both the Norwegian and American bases from the movie.

This is the first of SEVERAL Mates selections featured in the Time Machine this month.

As loathe as I am to admit Mates out here putting up a string of glorious Ws, his selections have been on fire this month, and he slid me this scorcher early in the month.

Infinitely danceable, and delightfully textural, I’m here for this all day. Mates said it was an early contender for song of the year when he first hit me with the link, and he’s not wrong.

This was another song that I wrote about earlier this month, and you can read my review here.

This was yet another song I wrote about earlier this month, and you can read my review here.

I’m full-on obsessed with this song.

And who do we have to thank for that?

But seriously, how effortlessly does this song shift from “still chopping, still cooking” math-rock, to punk, to staring-into-the-abyss, half-time sludge metal?

The correct answer is of course, “the most effortlessly,” because this is, pretty much, a perfect piece of music.

To be honest, I’m scared to listen to anything else by this band, in fear that it’s not as good as this.

Hopefully, I get over that.

Google the cover for this album y’all.

Dig the saturation, green tint and THE COLORS, DUKE, THE COLORS.

But seriously, it looks like a discarded shot from the music video Sixpence None the Richer’s shot to follow up their, megahit, “Kiss me,” right?!

The song’s bridge is truly, perhaps one of the most perfect musical moments of 2021 so far.

Simmering lightly beneath the vocals, the isolated guitars are chorused in a way in which you can literally SEE the summer fireflies flickering in front of your 11-year old face, as you dream about your gradeschool crush.

I can’t comprehend how good this is.

Everyone who’s been reading for awhile knows how I feel about basslines, and here, we have some STRUT work.

The whole song is great, but that bass is out here WORKING, working, and I’m here for it.

Bear with me folks, this is the second to last song that Mates put me on to, so we’re almost out of the woods.

Short but sweet, this powered a very quick turnaround storyboarding job that I did last week, and I smile thinking about the warmth of the music, my drawing light, and radiator coming together to inspire productivity doing what it is that I love.

Okay, our final selection courtesy of Mates, and MAYBE the best?

It’s between this, and the Hospital Bracelet song.

There’s something about what I’m going to dub the, “effortless R&B croon,” that will destroy me every time.

Nahima here is in procession of a quietly powerful voice over which she appears to have total control.

It’s beyond humbling, and I can’t wait for the whole album.

Senior year of high school, I went through a short but powerful Zakk Wylde phase.

I’ve since re-discovered him, and man… he’s really just so good.

To be clear, Ozzy isn’t slouching on here, and the chorus that he came up with for this tune ranks amongst the best that he’s ever done.

As tremendous as that chorus is, Mr. Wylde steals the show with his guitar solo.

Lyrical, and almost completely devoid of shredding (at least till the very end) it’s a masterclass in feel and playing with your heart. I sat down to learn it last week, and I truly can’t remember the last time I loved a guitar solo so much that I sat down to get all of the notes right.

To quote the ever relevant poet laureate, MR. Corey Woods, “this is live.”

13. White Walls- Between the Buried and Me

I’ve always kinda dug it, but listening to this a week or two ago, I think I came to fully understand why people consider this to be, BtBaM’s masterpiece.

I might still be riding for, “The Great Misdirect,” at the end of the day, but as far as closing statements go within the world of metal, this is pretty top-tier.

Effective as both a summation of most everything we came across in the album, and an isolated statement, this is 14 minutes of metal bliss, and I’m here for it.

Have you had a chance to check out the new column that BPM I are writing?

We put this track, and three other songs under the microscope last week, and we both had very favorable opinions of this.

True story, this is the work of someone from my gym class, freshmen year of high school.

Siergio was singing back then, and he’s singing still, with a new album set to come out too.

I missed this when it originally came out, but holy shit, it’s a perfect R&B song.

Bringing to mind the music of both Tank and Monica (a strange pairing, I know) this is something for late night creative work. Something to put on when the only light in your apartment is coming from your desk lamp, and your laptop.

The production here is on point, but listening to what Siergio’s doing with his voice with have you humbled, and in appreciation.

16. I Know the End- Phoebe Bridgers

Indie Pong is about positivity which is sometimes problematic for me, because I’m a born hater. I’m a born praiser too, because good work should be complimented, but I’m definitely one of those people who’s NOT going to listen to something everyone says is great, because I’m petty like that.

So, Ms. Bridgers, I humbly apologize for not seeking out your music until now.

My hater tendencies and pettiness have deprived me of something beautiful, and like any good lapsed Catholic, I now have some repenting to do.

Ms. Bridgers’ voice is delicate yet earnest, and it’s perfectly complimented by the instrumentation here.

The build towards the climax here is both beautiful, and masterfully executed. The mild freakout at the end is a bit jarring on the first listen, but it makes sense because… well, “the end is near.”

In any instance, this is an A1 piece of music, and everyone involved deserves our applause.

View all posts by Mr_Dodds